I don’t live in Baca County Colorado anymore, but it is the place where I grew up and still call home. It will always be home. This mini writing adventure began after I shared the picture below of my grandma holding what I now believe to be Orville Ewing’s wooden rifle in front of his wagon. The wagon was sitting in front of my grandparents store on 10th street in Springfield, Colorado. Based on the car in the background the approximate time frame for the picture was mid to late 1950’s. The photograph, not a postcard, interestingly enough is what sparked this post about postcards.

Following the Facebook share of the photo a few questions arose on how Orville was related to Elden Ewing, who was known to the locals as “Dink” or  “Dinker”.  Dinker was the Pritchett City Marshall. Orville was his dad.

Orville Ewing is one of the many colorful characters who has lived in Baca County Colorado.   Born in Indiana in 1888, he graduated from Newcastle High School in 1910. Having artistic interests, he attended an art school in Chicago for a period of time. Orville last resided in Pritchett, Colorado in Baca county passing away in 1978.

In his younger years he delivered the mail from the Baca county communities of Joy Coy to Buster, Two Flues and Atlanta.  Orville gave up oil painting because the paint affected his health and started pencil sketching instead in 1938.  Also that year he began a unique odyssey. Orville traveled the the highways and byways of America for the next 30 years in a wagon.  His wife Olive describes the wagon in the 1983 Baca County history book:

His conveyance was a covered wagon, not the high wheeled Conestoga type used by the early pioneers, but a small unit on rubber wheels.

This link takes you to the only known video clip of Orville’s wagon.  The video clip is attributed to George & Rella Duchow of Potter, WI

He made his living primarily by sketching, drawing and selling postcards of himself and his menagerie as he made his way from coast to coast.

There are an abundance of references to him such as a 1959 Lodi California news article which described Orville as an easy-going, gnarled, sunburned  old timer.  His travels are well documented and certainly amazing but postcards of him and his menagerie are the piece of his story which makes it live on.  The Hinton (Indiana) News – Jun 30, 1955  says Orville Ewing took Monon (Indiana) “by storm as he has every town that lay on his winding path.”  It also describes all of his worldly goods being carried in the wagon including… several thousand  color postcards.

No longer hidden in an old box in my mom’s basement,  I have a few of these postcards, similar to the one below: 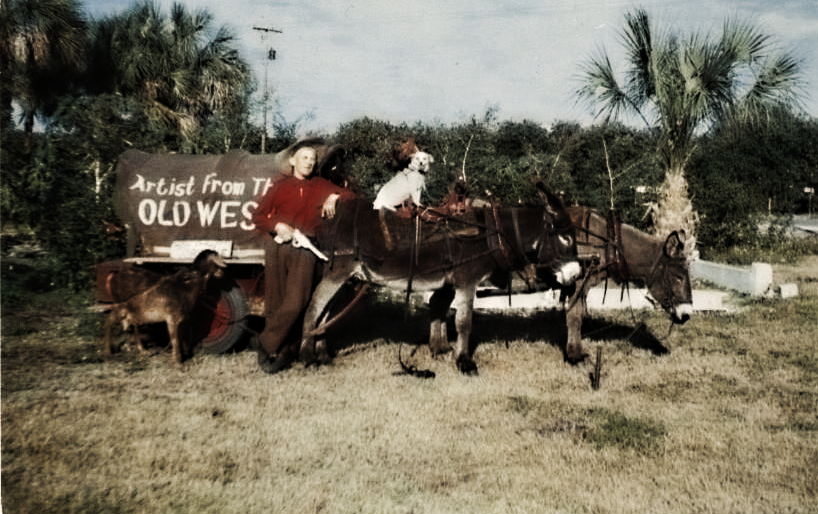 Below is another sample provided by permission of Sylvia Harrison from the collection of her grandmother Elsie Hargis.

I also remember seeing several of these postcards over the years, but never really thought about how many of them may have been sold in the 30 plus years he was on the road. The volume of postcards emphasize the extent of his travels and his contact with people all over the United States. Orville Ewing’s travels are alive and well even today when you look on eBay or do a Google images search for “Orville Ewing” .    Do this once and you will realize he sold a lot and I mean a lot of post cards. The image below is a small sampling of the staggering volume of these postcards for sale on ebay and various other online locations.

I was an artist until 1937 when too much paint got into my system and I was forced to give up this work. In 1938 I started out for the San Francisco World’s Fair, arriving in 1939. Soon after my arrival I shipped my outfit back to Colorado and then started for the New York World’s Fair. I arrived in New York in 1940 and was back again in Colorado in 1941. The touring menagerie has traveled from the Atlantic to the Pacific and from Canada to the Mexican border. One of the most interesting features of the menagerie is the six year old ox who weighs 1500 pounds. The Menagerie makes about ten miles a day. I was born in Indiana and now in 1943 am fifty-five years old. I have spent most of my time in the West since 1916

There are many groups that revolve around collecting postcards.  One such group in a  2007 newsletter tells us:

The message (on one of the members postcards) mentions that he smelled just as strong as his goats.  When the postcard club member interviewed Ewing’s widow and son in 1989  he mentioned the ‘goatly’ odor. They claimed,

Never bothered us, he was rarely home.

A USGenWeb Project  archive has more Orville postcards.  The USGenWeb Project  consists of a group of volunteers providing Internet websites for genealogical research in every county and every state of the United States.  This site provides great insight about the type of postcards Orville likely sold. According to the USGenWeb Penny Postcard Archive there were three primary postcards made during the time Orville wandered the US.   (NOTE:  Although this post focuses on Orville Ewing, another Baca County son, Jack Ratliff is also featured in the Baca County section of the this archive. It appears he also sold quite a few post cards)

The postcards are just one part of this story.   Orville Ewing was a cultural link to a time  and a pace of life that no longer exists.  Hopefully we can follow up with more discussion of this true American original.  If you have more quotes comments or stories please comment.